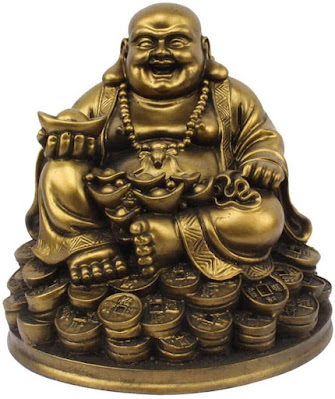 So one piece glided into the other. Of the story I’m writing. I wasn’t even trying for it. A perfect ice capade moment. If it’s all this easy, I actually like writing. I knew that anyway, but when everything’s a mud puddle, I forget. Right now I won’t go on anymore about, because I don’t want to jinx myself.

Beautiful day today. I love it when the skies blue, even when it’s cold, but it’s warm.

A nice laughing Buddha statue came in the mail and it looks really good. You can’t tell by the online photo. I mean everything looks good ‘til you get it. That’s why I have so many horrible tarot decks, but this laughing Buddha is the bomb.

It feels nice to feel happy. I know my happiness should be totally inward and not dependent on material things or the the temporal fluctuations of fate, but at least I’m happy. That’s a plus.

Unless I’m too happy. Uh-oh!

Posted by David Alan Richards at 8:04 AM No comments:

Wrestling my latest story. It’s scribble scrabble and the pieces don’t fit, but so far it’s ten pages and it matters a lot. To me. Wish me luck making this into a semblance of something someone will publish someday and if I can’t, let me get super into the process, enough to have made it worthwhile. This I pray to the gods of yore. By Odin’s blood and staff!

Meanwhile it’s supposed to go up to eighty-five today and I’m getting outside no matter what. Just the idea of feeling eighty-five on my skin is exciting me. It would be even nicer if I had a pool to jump into, but I take what I get. Maybe a cold shower?

I could  be forced to turn the AC on, although it hasn’t been checked yet, just so my blood pressure meds don’t fade in the heat. On the other hand, maybe that would be the best thing forcing me into a plant-based diet in order to survive.

One thinks one’s diet is healthy until one looks back and finds it riddled with eggplant parmigiana dinners, ( I know--eggplant's a vegetable, but really), and Gatorade.

I’m listening to the 2021 Food Revolution Summit with people like Joel Fuhrman and boy, do I feel  self conscious about my food. I eat healthy half of the time, but it's the other half. I don’t want to die of digesting junk in twenty years, although something will kill me eventually, so that’s another way of looking at it.

Feeling better after me and Roe’s vacay, still on a dark stage talking into the void, but the floor’s been swept a bit.

Listening to aboriginal music. A lot. And getting into it. The didgeridoo. I know it’s ridiculous, but it somehow makes me feel at home.  Giving no credence to past lives, I guess it just hits me the right away. I don’t think it’s cultural approbation if you enjoy the sounds quietly to yourself making no claims to fame or anything.

Today’s a beautiful spring spent mostly inside writing and reading, but I don’t have cabin fever. I’ve cleaned up our rooms and the way the sunlight hit them through the window, everything seems spacious.

Reading little stories here and there-a good one by Neil Gaiman called  Down to a sunless sea about an old woman lamenting hideous things that happened to her son when he was a sailor of the ocean. And an irritating book by a cosmic philosopher that’s too cosmic. When will people realize that I AM isn’t all that, just two words that mean what they say, such as I AM God, I AM bored. I AM eating sweet potatoes.

Maybe I AM unenlightened.

Posted by David Alan Richards at 9:13 AM No comments:

Email ThisBlogThis!Share to TwitterShare to FacebookShare to Pinterest
Labels: didgeridoo, Down to a Sunless Sea by Neil Gaiman, I AM

Writing and the Sun: Pain vs. Pleasure

To read a sad story takes awhile. To write a sad story takes…a long time. In spring, I can’t picture myself doing anything but looking at the sun.  I guess I’ll get back to my moaning and groaning in type in a few days when it rains, but I’m thinking of only writing happy stories from now on, because… it takes too much out of you.

Me and Roe are booking some vacations. They’ll be nice. Various natural scenarios. The woods and the sea.

And now back to books.

No Heaven for Good Boys is too upsetting, but I’ll keep reading it. It’s amazing the sway the marabouts have over poor kids in Senegal. They take them from their families and treat them horribly. No one does a thing. The kids are beaten if they don’t raise enough coinage begging in the street. Or worse. Now I’m invested in the characters, I seem in for a horrible time, unless I throw the book out the window which I never do, although it might be for the better. Keisha Bush really places you there if there is where you really want to be. I feel torn between the sway of good writing and  the sway of heading for the hills.

My own depressing work of art isn’t good writing yet and won’t be until a lot more drafts. At least as good as it’s gonna get. I’m going to have to figure out a way to enjoy myself through it or not do it, because now it’s just pain.